Do you know of any culinary connection between Tamil cooking and French?

Seems rather unlikely, doesn’t it? I discovered the intersection of the two cultures in the story of colonialism in India and one French sounding word -- vadouvan. This spice blend has been a trendy ingredient in the Western world of haute cuisine for the last few years, with gastronomic celebrities adding it to everything from chicken to stews and from grains to salads. However, both the spice and the word originated in Southern India, as did many other popular spices and the infamous spice blend called curry powder. Vadouvan is often referred to as French curry powder or in the French language as “qu-ree.”

The French, on a smaller scale than the English, had colonial territories on the Indian subcontinent and administered them for over three centuries under the auspices of the French East India Company. Arriving in India in the mid-seventeenth century, they established factories as far west as Surat and as far south as Masulipatnam. These were taken over by the British less than a century later. There was only one territory on the Indian subcontinent that the French held onto for a considerable period of time. This was Pondicherry in eastern Tamil Nadu, which they acquired in 1673 and occupied till the middle of the twentieth century.

And the Pondicherry region was the birthplace of vadouvan. Known in Tamil as vadakam, vadagam or vadavam, this unique blend was made annually during the hot, dry summer. Vadakam consists of whole mustard seed, cumin seed, crushed fenugreek seed and udad dal (split black gram lentils) to which garlic, onion, salt, and sometimes curry leaves, were added. What was really unusual was that unlike spice blends in other parts of India, this was made of dehydrated ingredients and shaped into a ball for easy storage and distribution amongst family members. The ball was an easy, quick way of adding flavor to dishes when garlic and onions were not always easily on hand.

To use, a ball of the spice was broken into the desired portion, added to hot oil to allow the mustard seed to pop and then used as a base for other ingredients like chicken or vegetables.

The French version, vadouvan, varies somewhat. Rather than sun drying the ingredients, they are dehydrated in a hot oven. The recipe diverges from its pungent, savory roots with the addition of chili powder, cardamom, cloves, fennel seed and nutmeg. Lastly, the blend is not made into balls but left as a powder. And that is how I first discovered it at a farmers’ market in Versailles, just outside Paris.

Here is a recipe for the traditional Tamilian version. Add it to your favorite ingredients to give them a new burst of flavor.

Rinse 25 grams udad dal well. Soak it and the fenugreek seeds in water for 60 minutes. Then grind them into a coarse paste. Set aside.

Peel the onion and garlic. Crush them coarsely in a mortar and pestle or pulse in a food processor to break them into pieces. Do not crush them so that they release their juices.

Place the onions and garlic in a large mixing bowl or platter. Add the remaining udad dal, Bengal gram, mustard seed and cumin seed and mix well. Stir in the ground dal paste, turmeric and salt.

Rest the mixture covered for one day. On the second day, uncover and rest it in the sunlight. On day three, stir the mixture well and shape it into balls, using castor oil to bind them. This oil acts as a preservative so the vadakam lasts for a year.

Dry the balls in bright sunlight for ten days till completely dehydrated. Alternatively, use a warm oven to slowly dry out (but NOT bake) the balls (200 degrees Fahrenheit for 4-5 hours). You can also dry out the powder in an oven, at the above temperature, stirring it  occasionally so it drys evenly. Cool and store the powder or balls in an airtight jar.

Heat the oil in a skillet. Add the vadouvan and let the mustard seeds pop. Stir the ball to break it into small pieces. Add a touch of red chili powder, if you like. Sauté well for 1-3 minutes.

Add the chicken, vegetables or dal to the pan. Stir to mix with the spices and cook till tender, adding water if needed. Mix in lime juice if needed and add salt to taste.

Try the recipe and tell me how it turns out. You can reach me at kaumudi@un-curry.com

Posted by Kaumudi at 9:34 AM No comments:

I was recently asked by a friend and colleague in India to write a column about spices for an Indian newspaper. She wanted me to give some background and history about spices and also offer recipes that Indian cooks might not be familiar with.

I looked up the broadsheet and realized that it was a Hindi-language publication, which threw me for a loop! I studied Hindi for exactly one year in tenth grade. While I did surprisingly well, there was no way I could today write about food eloquently in Hindi. Then I realized I had an ace in my back pocket. My mother is fluent in many Indian languages and grew up speaking and writing Hindi. So I asked her to translate my piece and she did a fabulous job. Here is the first piece that appeared in Dainik Bhaskar (my English version, of course!). Look out for more over the next few months.

I am amused by the fact that non-Indians automatically associate chilies and heat with Indian food. I teach Indian cooking in California and my students are astonished when I say that our food is not always spicy-hot and did not use chilies from time immemorial! And yet how well an ingredient can be incorporated into a culture and indigenized is epitomized by the chili in its adopted land of India.

For millennia, Indians gave their food heat with cinnamon, cloves, black pepper and ginger. The chili is a new entrant on its culinary scene. Christopher Columbus may have been the first European explorer to taste the chili in the Americas, and Spanish and Portuguese sailors brought plants back to Europe where they were an exotic novelty, grown in monasteries. The monks experimented with the fruit’s culinary and medicinal properties and found that it was a less expensive alternative than the exorbitant black peppercorns that were brought from India.

Though the chili came to Asia with sixteenth century Portuguese explorers, it quickly proliferated all over India, which is thought to be “the world's foremost consumer of chiles,” using “hundreds of varieties representing a huge range of tastes and heat,” (Saveur magazine). From the non-spicy chilies of Kashmir to the fiery red ones of Andhra Pradesh, the chili pepper is there to stay. Indians use it fresh and dried, whole and ground up, on its own and mixed into spice blends.

But its history is far older than its association with Indian cuisine. There is evidence of chiles having been part of the human diet in their native lands, Central and South America since 7,500 BC. and they are said to have been domesticated in Mexico about 6,000 years ago.

The word chili itself refers to the berry or fruit of a plant belonging to the genus Capsicum. The word pepper was added to its name to describe the hot taste of the fruit. Today, chilies are a huge component of South and East Asian cuisines like Chinese, Thai, Vietnamese and, of course, Indian.

Five domesticated species are used all over the world. Capsicum annuum includes bell peppers, cayenne and jalapenos. In the Capsicum frutescens variety are the Portuguese piri piri, Thai chilies and Malawian Kambuzi peppers. Notoriously fiery chilies like the habanero, Scotch bonnet and Naga chili from northeast India fall under the species Capsicum chinense. The last two varieties are Capsicum pubescens and Capsicum baccatum, not commonly seen or known outside South America.

I was speaking to my Peruvian friend Ana recently about Indian food which fascinates her. Then I asked her how chilies were used in her native country and that is how I learned about the Aji Amarillo (pronounced Ah-hee Ama-riyo) chili which I had never known about before. Named for its distinctive yellow color (amarillo means yellow in Spanish), this medium-hot, flavorful and thick-fleshed pepper belongs to the Capsicum baccatum species. As Max Falkowitz, the editor of the website Serious Eats New York (http://www.seriouseats.com/2010/06/spice-hunting-aji-amarillo-chile.html), says, “If there was a chile to taste like sunshine, this would be it.” 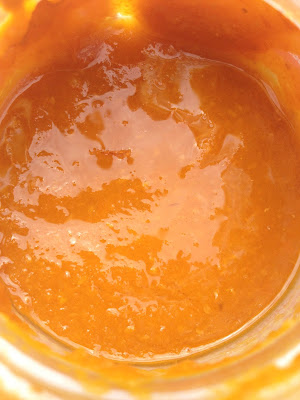 The Peruvians’ beloved Aji Amarillo is commonly used across the nation and Ana says that her countrymen often have it growing as a hedge in their gardens. The pepper,  which turns a gorgeous orange as it ripens, can be used fresh but is also dried, which renders it sweeter like sun-dried tomatoes. It is available fresh and canned, as well as in paste form, blended with salt and garlic. 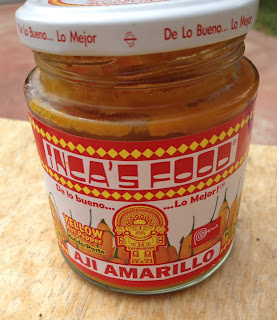 The Aji Amarillo chili finds its way into many classic Peruvian dishes like Causa Rellena,  a mix of other native South American ingredients like potatoes and avocados with imported ones like chicken, lime and garlic. Blended Aji Amarillo is also made into a chili-garlic sauce seen on tables at Peruvian restaurants, the way cilantro chutney is found in Indian ones.

However, the dish that Ana waxed eloquent about was Papas a la Huancaina (potatoes made and named after the style of the city of Huancayo in the Peruvian Highlands). Since Aji Amarillo or paste might be hard to find, try using one yellow or orange bell pepper instead, adding a green chili or one teaspoon red chili powder. If you have sun-dried tomatoes around, add a few of those for texture and sweetness too. Add more or less chili powder, to taste.

Sauté onion, garlic, and chilis or paste in the oil until softened, 3-5 minutes. Remove from heat and cool.

Place onion-chili mixture in a food processor or blender. Add evaporated milk and blend till smooth. Add cheese and crackers and blend till the sauce is thick and silky.

If needed, thicken the sauce with more crackers or thin it out with milk. Season with salt and pepper. Serve at room temperature or chilled.

Bring a large pot of salted water to the boil. Add the potatoes and cook about 20 minutes until tender when pierced with a fork. Drain well and cool.

To serve, arrange lettuce leaves on a platter. Slice potatoes and place on top of the lettuce. Pour the huancaina sauce over the potatoes, and garnish with slices of hard-boiled eggs and black olive halves.

Write me at kaumudi@un-curry.com about how the recipe turned out and what you thought of the Aji Amarillo, or what ingredient you substituted for it.

All pix by Kaumudi Marathe